Anno 2016, the Italian duo of HELALYN FLOWERS strike back at full force with the uncompromising determination of redefining our sonic foundation! A quite ambitious challenge after the detonating success of their last studio album “White Me In // Black Me Out” released back in 2013 after which we were all wondering what could be achieved next… Well, with the last October surprise release of the “Beware Of Light” EP, HELALYN FLOWERS clearly reaffirmed their sonic force and capacity of selecting the perfect guests to collaborate with for an optimal result. The astounding duet with Chris Pohl (BLUTENGEL, TERMINAL CHOICE…) instantly pushed them back in the spotlight of all alternative clubs across the globe.

N0emi Aurora and maXX are not the kind of artists who content themselves repeating the same recipe of success again and again. And on this new 4th full length album, they more than ever push their artistic limits to the max: connecting extremes together, fusing eclectic music styles just like playing with fire and ice, experimenting with their colorful sonic palette for the absolute fusion of genres distilled into their very own and so characteristic hi-energy and modern darkwave style lead by the charismatic female vocals of N0emi Aurora whose impressive vocal range and extravagant personality are showcased at their ultimate best evoking singers like Lady Gaga, Siouxsie Sioux or yet Cristina Scabbia at other moments! Just take extremely opposite songs like the catchy addictive cyber pop of “Frozen Star” and the speed punk rock collaboration with ANGELSPIT on “Maths Of Chaos” and you clearly perceive that the bar set by this album of maturity for HELALYN FLOWERS affirms the band’s open minded creative approach. We witness their unique ability to marry their diverse range of influences across their compositions while keeping a sharp sound cohesion along the line while making at the same time allusions to RAMMSTEIN’s heaviness, GARY NUMAN’s melody, DAVID BOWIE’s depth, KMFDM’s rage, THE CURE’s darkness or yet MADONNA’s magnetism.

From the martial rhythmic Industrial Metal of “Karmageddon” or “New Days Of Babylon” to the EBM-injected Electro Rock of “Synthetic Paranoia”. From the surprising blend of PSYCHIC TV‘s Acid Techno-Era meets THE PRODIGY and Black Metal-infused KILLING JOKE tones of “Shadow Complex” to the sci-fi ambient touch of the post-urban hit “Frozen Star”. From the freezing ritual chant of “Eerie” to the goth rock anthem “For All Bad Things” or yet the ultimate industrial ballad “I Saved An Angel” and its ghostly guitars, melodic piano notes and stunning vocal lines. “Sonic Foundation” is an addictive album uniting catchy Electro and alluring Industrial Metal in absolute symbiosis thanks to HELALYN FLOWERS’ unique sound alchemy bringing power, melody, darkness and sexiness in one cohesive sound shell. “Sonic Foundation” is an album that uncoils through dangerous and surrealistic figurative worlds, invoking post-primitive scenarios à-la William Burroughs and David Lynch.

The band’s strong imagery and iconic visuals get an expanded dimension on the albums deluxe carton box edition augmented by the “Androids In Agony“ bonus disc, a non stop-mix of reinterpretations by acts like THE PSYCHIC FORCE, ALIEN VAMPIRES, EGO LIKENESS, SIMON CARTER, EEXEE etc., while Diana S. from JUNKSISTA and Ms Larsen from LUNACY BOX contribute with remixes and additional guest vocals. Cherry on the cake: add two hard-club mixes from HELALYN FLOWERS of their songs “Karmageddon” and “Shadow Complex”… 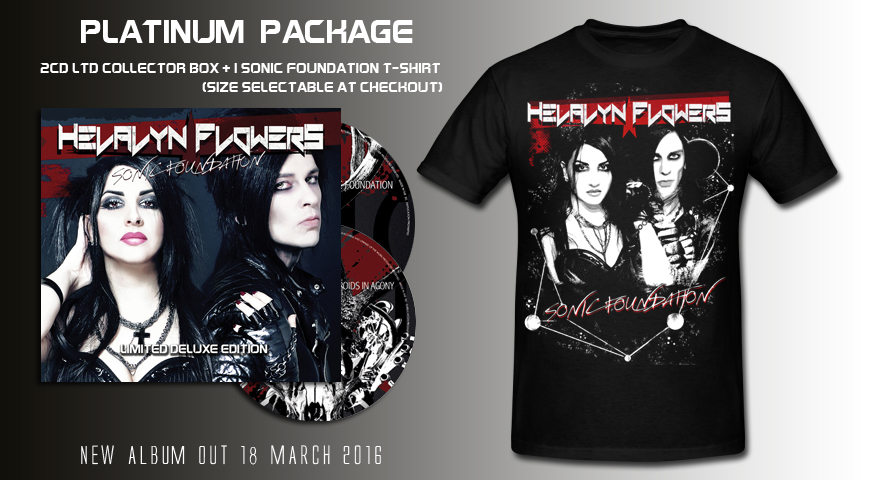 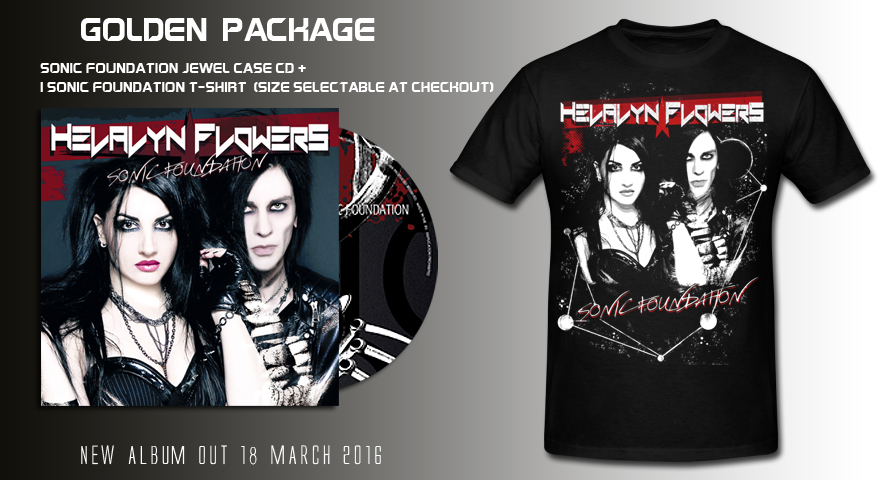