OUT TODAY our new album ‘Nyctophilia’!

We’d really like to thank all the people who supported us buying our music and merchandise (their names appear on the album booklet!), our label Alfa Matrix that never stopped believing in us, our friends, families, DJs, Radios and Magazines and all the great acts that contributed with their talent by remixing our tracks! We’re really proud of the results and we hope that you’ll enjoy our new album too! We put in all our hearts and souls! Thanx a lot for believing in us! Stay Nyctophiliac! IMJUDAS Junksista Psy’Aviah Six Faces ADAM KULT Side-Line Magazine The Synthetic Dream Foundation Digital Shadows Alien:Nation People Theatre In Black Lights Wasserkraft Manifest @Lis Van den Akker / @Jen Ascending

With “Nyctophilia”, maXX​ and Noemi Aurora share their addiction to the night and carry us in their very own surrealistic nocturnal world, plunging you into a sonic time tunnel sucking the 80’s New Wave moody catchy melodies and reinjecting them into a 21st century cyber industrial futuristic landscape, the whole reflected by HELALYN FLOWERS’ unique sonic kaleidoscope.
Please check the refreshed band store at their Bandcamp page, which visual perfectly fit the electro-nocturnal psychotic life as expressed through the own album concept.
‘Nyctophilia’ follows up its anticipating single ‘Kamikaze Angel’, released last February, which lead title turned out to a real detonating hit that made big expectations grow. Not by chance, Side-Line Magazine​ wrote: “…if the new album is as good as this first single/EP then we have the winner for the best electro-rock album for 2018 by far”.
Make one of the very first copies (all signed by the band) YOURS NOW by visiting the links below and… let’s keep gnashing to shout a BIG howl all together as one next 22 June, 2018 (street release date of ‘Nyctophilia’ worldwide)! 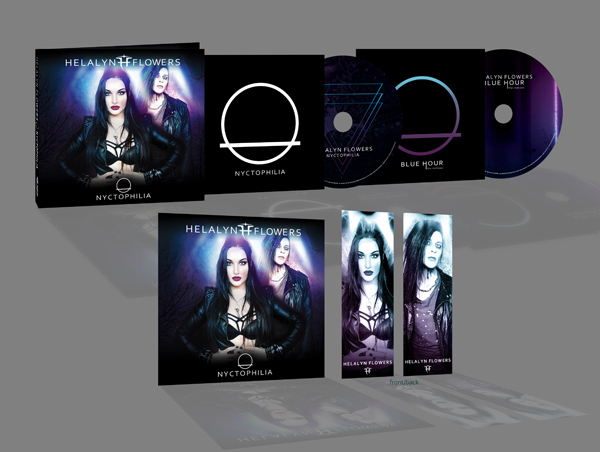 It includes ‘Blue Hour’, an exclusive bonus disc including 8 awesome remixes from various eclectic arists from the electronic/dark/ebm scene + 3 amazing club anthems versions by the band itself and, cherry on the cake, a special version of the song ‘Beyond’ featuring maXX at vocals under the name of IMJUDAS, his own electro-noir solo project!
This stunning new edition format also includes a thrilling artistic full color 8-pages booklet designed by Noemi Aurora for Toxic Visions which shows off stunning conceptual illustrations based on the own album nocturnal theme, by dipping the band itself in an exclusive darkly fascinating atmosphere.
The booklet also includes full lyrics + a special thanx list with the names of all those who supported the band during promotional campaign: ‘Your name on Helalyn Flowers next album’!
Last but not least, included in this special limited edition a tasty postcard and a back/front Helalyn Flowers bookmark!

1. Tetrachromatic
2. Unleash The Wolves
3. Kamikaze Angel
4. Let Me In
5. Breathless
6. Run Away (with My Demons)
7. Beyond
8. When It Is Not Black Enough
9. Nyctophilia
10. MorphineHelalyn Flowers ‘Blue Hour – The Remixes’ (Bonus Disc)

Dear angels of the night, if like us you feel like belonging in the dark and feel so misunderstood by those people around you who find you sad, strange and even dangerous when they see you aimlessly wandering off late at night. We invite you embracing the Empyrean of darkness through HELALYN FLOWERS’ 5th studio album. The ultimate result of long creative night sessions in the band’s own studio in Roma – Italy.

With “Nyctophilia”, Maxx and Noemi share their addiction to the night and carry us in their very own surrealistic nocturnal world where you will rapidly feel comfortable, far away from the daily routine, opening your mind to a unique mosaic of colours and emotions, plunging you into a sonic time tunnel sucking the 80’s New Wave moody catchy melodies and reinjecting them into a 21st century cyber industrial futuristic landscape, the whole reflected by HELALYN FLOWERS’ unique sonic kaleidoscope.

Strong from his constantly improving meticulous production skills that he could obviously solidify and refine throughout the previous albums recordings, Maxx intelligently revisited the aggressive hi-energy spontaneity of his early songs from the band’s 2007 debut “A Voluntary Coincidence” and fused it with the obsessive strength and vicious catchiness of the last “Sonic Foundation” opus.

“Nyctophilia” kind of sums up HELALYN FLOWERS’ stunning and quite eclectic discography while bringing it up to the next level. Wild mechanical industrial beats and sinister addictive synths blow an icy blast on the unique lush and revolted female vocals of Noemi Aurora. Fire and ice unite for a tour de force of high-impact sonic impressions and in-depth exploding emotions.

This wonderful new album offers fast-sequenced electro dance grooves and highly catchy pop vox clashing onto powerful electric guitar riffs (“Tetrachromatic”, the floorkiller “Kamikaze Angel”, the NEW ORDER-ish and almost romantic “Beyond” or yet the album title song “Nyctophilia”); but also kind of timeless pop wave tunes with a modern dynamic touch evoking classic acts like CLAN OF XYMOX, THE CURE, GARY NUMAN or yet DEPECHE MODE (“Unleash The Wolves”, “Breathless” and its addictive synth melodic lines, the darkwave goth pop “Run Away (With My Demons)” or yet the oppressive gothic rock anthem “When It Is Not Black Enough”). All beautiful songs on which Noemi’s voice evokes similarities with good old GHOST DANCE, SKELETAL FAMILY, SIOUXSIE, but also GARBAGE and other WITHIN TEMPTATION. Last but not least, HELALYN FLOWERS also stand for more upfront raging industrial metal moments with impressive adrenaline pumping revolted vocal assaults (“Let Me In” and the edgy and almost self-destructive cyber pop rock of “Morphine”).

With “Nyctophilia”, the alluring Italian duo offer us an escape from our basic down-to-Earth lifestyle towards the exciting darkside of the world where we acquire a deeper confidence with our own personal demons and turn them into sources of inspiration feeding our creative flow.

HELALYN FLOWERS’ new album has absolutely all the ingredients to apply for becoming one of the best electro pop rock albums of the year 2018! Play it loud and without any moderation!

The limited edition of the album holds a 12-track bonus disc featuring 3 amazing remixes by the band itself revealing the impressive ability of Maxx to mutate his own dark songs into forceful club anthems! Add to this a sonic orgy of remixes of the band’s last club hit single “Kamikaze Angel” rendered in the most varied styles ranging from hard dance to pop rock through lo-fi electro and other future electro. Last but not least, a very alluring duet on “Beyond” with the enigmatic IMJUDAS, Maxx’s very own and promising dark pop solo-project whose debut album is expected later this year…
credits
releases June 22, 2018 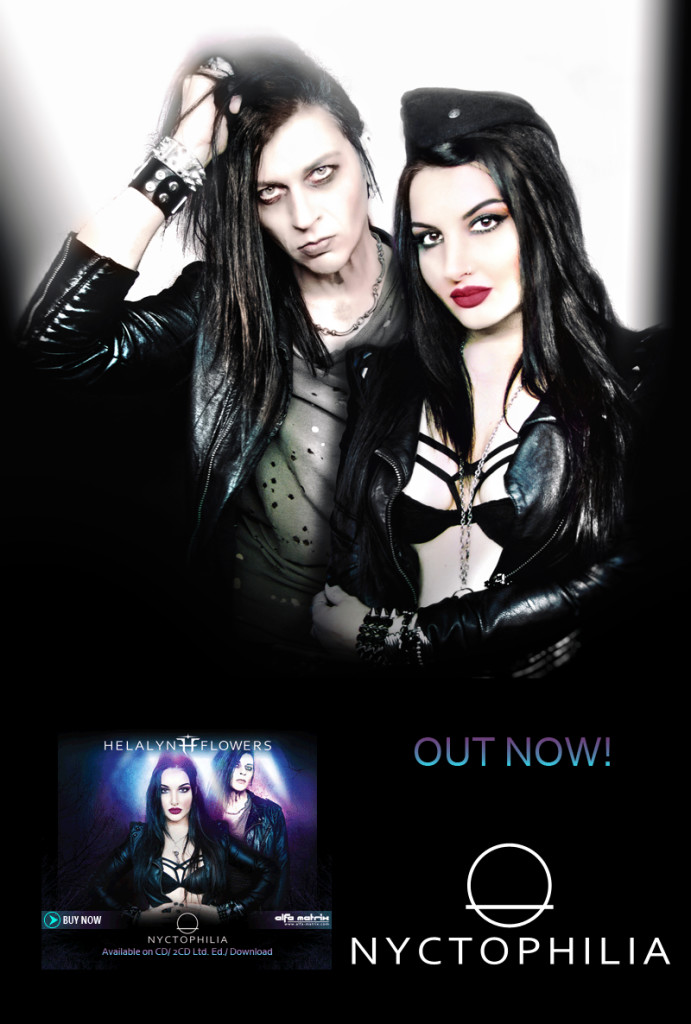