Helalyn Flowers featured on German Magazine ‘Cover Up!’ to talk about lots of anticipations on new upcoming album “Sonic Foundation” plus curiosities about various topics and stuff! German version is available at http://www.cover-up-newsmagazine.de/HELALYN-FLOWERS—Interview.html But you can enjoy exclusive English version of this brand new interview with maXX below! 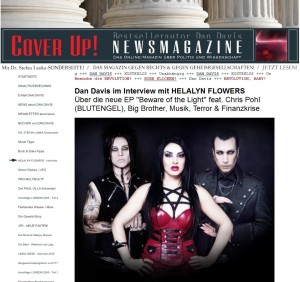 Dan Davis: HELLO. YOUR NEW EP ‘BEWARE OF LIGHT FEAT. CHRIS POHL’ IS NOW AVAILABLE. HOW LONG HAVE YOU BEEN WORKING ON IT AND WHAT CAN YOU REPORT THIS?

(maXX) This E.P. is a warm-up for the new album and focuses on the title-song, available here both featuring Chris Pohl from Blutengel and in it original version that will be included in the new album as well.
It features precious remix-contributions from The Psychic Force, XMH and Aesthetische that are each representative for a different shade of Electronic music.
It took us just the time to manage remixes and to define our collaboration with Chris Pohl, since the album was already recorded and mixed.

Dan Davis: WHEN WAS THE BAND STARTED AND WHAT WAS YOUR FIRST TRACK THAT YOU HAVE TAKEN TOGETHER?

(maXX) In 2004 we stopped our previous band (The Claw) when we realised that our force lies in blending machines and hearts as a duo. It took us just 6 months to have our first Mini-CD complete.
We were spending a lot of time in our factory with drum-machines, old and new hardware, synthesizers, a mixer, a guitar and a microphone and writing all what we felt without limitations.
My first remembrance was the song “Disorder” that was included in our first self-released EP “Disconnection” (2005).

Dan Davis: HOW DID IT CAME TO WORKING WITH CHRIS FOR THE SONG? AND WHAT IS THERE TO REPORT ABOUT THIS VERSION?

(maXX) We were searching for something special as an appendage to the new album. Usually, we search for cool remixers, but we wanted to look further, so simply we asked Chris if he was willing to join us for a featuring/ remix adventure. Everyone can hear the result of it now.
It has been a pleasant and straight collaboration and Chris Pohl is a nice guy who didn’t become a swollen-headed. Contrary, I’ve met a lot of people much less famous than him behaving like pathetic rockstars who are in just because of the money.
I think that this version of “Beware Of Light” has a lot of Blutengel inside, Chris put some synthpad-choirs and drum-kit that are so close to his main band. And his chorus sounds so catchy and great.
Sure he put his very own in this version though respecting structure, melody and mood of the original. 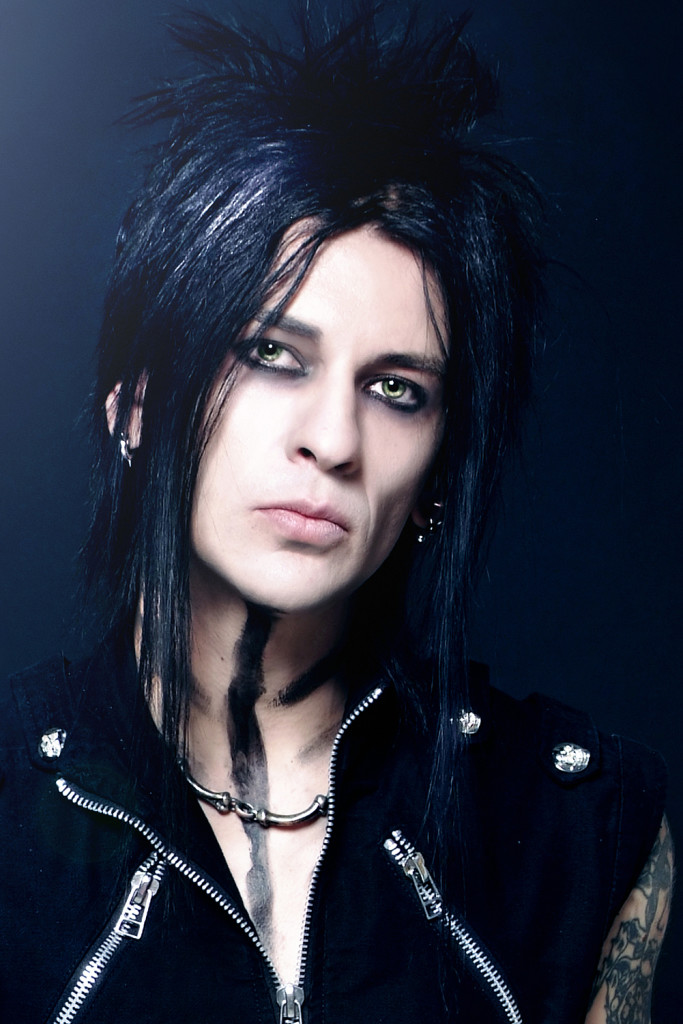 Dan Davis: WHAT YOU SEE AS YOUR MUSICAL INFLUENCES?

(maXX) It’s hard to recognize them. But simply because when we write and record for Helalyn Flowers we have only Helalyn Flowers in our heads. Only afterwards we have fun trying to identify all kind of eventual influence!
As for the new album “Sonic Foundation” we think that an album like “Outside” by David Bowie have had its relevance, just because we listened a lot to it during the making of the record. The same goes for the early 80s electronic era by Queen or some stuff by Gary Numan, early Bjork’s works, Ministry, NIN or even old Speed/ Thrash Metal like Motorhead, Bathory and Metallica. Industrial and EBM parts stick a lot to elder names like Skinny Puppy and Frontline Assembly…
But you see, you’ll find traces of these artists only in certain shades of our sound so they are not representative of it.
The sound of Helalyn Flowers always stood in the borders between genres and not into the genres.

Dan Davis: HOW WOULD YOU DESCRIBE YOURSELF YOUR MUSIC STYLE?

Dan Davis: YOUR FAVORITE VERSION ON THE NEW EP IS?

(maXX) If you mean remixes, personally, I’m very bond to The Psychic Force. It’s the kind of Industrial I like more.
Also, I really love the work of Aesthetische that’s high quality Dance Music that deserves all the world’s attention to me and also XMH did a killer job.
This time it’s very difficult to choose just one since the quality of all remixes (including also the ones for the limited edition of the new album) is top-notch.

Dan Davis: HAVE YOU ALREADY PLAYED BEFORE HELALYN FLOWERS IN OTHER BANDS?

(maXX) I play in bands since I was 13. I used to sing in Punk/ Hardcore, Thrash Metal and Rock bands before I founded a couple of Black Metal bands that have had a cult-follow between late 90s and early 00s thanks to the release of a bunch of vinyls spread through a narrow circle of fanatics . In 2011 I released the debut E.P. of my solo side-project The Wet that sounds like a devastating cross between Industrial and Thrash Metal with Punk and Electro influences. Please follow here: www.thewet1.bandcamp.com

Dan Davis: THE FUNNIEST/ MOST ANNOYING WHAT HAPPENED TO YOU DURING THE RECORDING OF THE NEW EP?

(maXX) Sure an outer voice captured in the Noemi’s microphone is worthy of your attention.

Dan Davis:  CAN YOU SAY SOME WORDS TO THE TRACK ‘KARMAGEDDON’ ON THE EP?

(maXX) It started from a Noemi’s idea. She came with this spelling-choir “K.A.R.M.A.” that sounded so aggressive to my ears. It’s more like an army of angry amazons rather than a cheerleaders ballet.
So the song went ahead on the line of aggression, in fact it’s one of Helalyn Flowers’ toughest songs ever.
Lyrics are about not accepting your fate and destiny. Nothing is written and you have the power to manipulate your own ‘karma’ instead of accepting it passively.

Dan Davis:  YOU WILL RELEASE YOUR 4TH STUDIO ALBUM ‘SONIC FOUNDATION’ IN SPRING 2016. WHAT WILL THE FANS EXPECT?

(maXX) For someone it may sound like a return to our debut-album “A Voluntary Coincidence” with the dark touch of our latest “White Me In | Black Me Out” and I can’t deny them.
But to me “Sonic Foundation” is a high focus on the Helalyn Flowers’ sound. It’s simply the core of Helalyn Flowers for it’s a brave album.
You can find a lot of new shades and things we never did before, from Industrial-ballads to Hard-Core/ Speed tempos and sci-fi settings but our signature is always well readable and audible.

Dan Davis:  WHICH SONG OF HF REPRESENTS FOR YOU THE BEST, FOR WHAT IS HF?

(maXX) “Frozen Star”. It’s from the upcoming album so at the moment you can’t know it, so I suggest you and your readers to pay attention to it as soon as it’ll be released.
It has everything Helalyn Flowers is about. Also, it’s going to be one of the singles taken from “Sonic Foundation”.

Dan Davis:  ANOTHER ISSUE: WHICH THEME YOU OCCUPIED THE MOST IF YOU WATCH TV THESE DAYS? AND WHY?

(maXX) Today we’re witnessing the explosion of TV-series. Networks are bombarding us with hundreds on a daily basis like if we had the actual time to see and digest them all! TV shows are demented and absurd while talk-shows are filled with political manipulation. You know, I choose to take a bit of everything with a sense of detatchment and doubt, remembering to myself that I have much better to do and think at that’s far away from watching TV passively. But if I want to relax and watch TV passively then I do it just because I choose to turn off the chaos inside my head! I prefer to watch a movie, a good Horror movie or a Thriller movie. Also extremely funny movies are welcome for I love to laugh to tears!

Dan Davis:  DO YOU THINK THE PUSH FOR EXPANDING THE WORLD IN A BIG BROTHER SCENARIO IS A NECESSARY EVIL TO GET MORE SAFETY – OR DID YOU SEE THIS PROBLEMATIC?

(maXX) I can’t see any advantage for me to live in a world ruined by Capitalism. I am part of the middle class and if someone is achieving its repression then he’s going against me. I am an individual before a subject. I want to choose my government. I don’t know anyone who agreed on being part of a United Europe that’s basically doing nothing against terrorism and financial crisis. The dramatic results of the ‘Big Brother’ are all highlighted in every fucking news.

Dan Davis:  YOUR FIRST CD YOU’VE BOUGHT IN YOUR LIFE WAS? WHY?

(maXX) Actually it was a vinyl! It was summer 1987 and the record was “The Final Cowntdown” by Europe. I was 7 and I went crazy for that band and for the Hard Rock scene of those years, so I asked my parents to buy it for me. It stirred me so much that I wasn’t thinking at nothing else but music. And it’s the same today.
I started buying CD’s in 1992 and my first was a couple: “Nevermind” by Nirvana and “Adrenalize” by Def Leppard. Actually I continued to buy regularly vinyls until late 90s before CD’s took the major part of the music-market.
I love CD but I’m happy that today vinyls cover a huge part of the market. When I have the chance then I am happy to buy a vinyl if well inserted and with a huge artwork!

Dan Davis: WHAT MUSIC ARE YOU LISTENING CURRENTLY MOST FOR YOURSELF?

(maXX) I’ve always been very curious about music. I’ve tried to know all kinds of music, but basically my listenings are focused on early Black Metal (Venom, Bathory…), old Rock’n Roll (Lou Reed, Kiss, Aerosmith, Led Zeppelin, the Doors…), Punk Rock (mainly American Hardcore/Punk of the 80s, like The Dead Boys, Ramones, Misfits, Minor Threat, Black Flag…), old Industrial (Revolting Cocks, Throbbing Gristle, Psychic TV, Skinny Puppy, Ministry…) and Hard’n Heavy (Alice Cooper, Ozzy Osbourne, Shotgun Messiah, Motley Crue, Metallica…). I don’t know much about newer acts because ‘alternative’ music has taken a turn that I don’t like and most of the times I was disappointed by a lot of ‘newcomers’. Also, I am very focused on the music that I make so definitely I choose to spend my time in being creative.

Dan Davis: YOUR CURRENT FAVORITE TRACK FROM HF IS? WHY?

(maXX) ‘Frozen Star’, as I mentioned before.

Dan Davis:  YOU ARE WORKING WITH AESTHETISCHE, INERTIA, STUDIO-X, NEIKKA RPM AND OTHERS FOR YOU LAST 2CD VERSION FROM ‘WHITE ME IN BLACK ME OUT’ FROM 2013. HOW DID IT HAPPEN?

(maXX) Our label Alfa Matrix always releases our albums in both standard and deluxe limited editions. This last is a 2CD box including also a lot of goodies (posters, pins, postcards, posters, guitar pens etc.).
Usually, the 2nd CD is filled with remixes the most because they represent a quick and good extra.
It would be wasteful and titanic to work on further unpublished stuff mostly if you come from almost 2 years of work with an album!

Dan Davis: WILL THE NEXT ALBUM ALSO INCLUDE A ‘REMIX’ CD? WHAT ARE YOUR PLANS IN THIS REGARD?

(maXX) It’s including a kick-ass selection of excellent remixes and I can tell you that also acts like Alien Vampires and Ego Likeness have had the joy of destructuring and manipulating some of our new songs!

Dan Davis:  DO YOU PLAY CONCERTS IN THE NEXT TIME, MAYBE IN GERMANY?

(maXX) Unless Third World War will sweep us away, hopefully!